Love to be a professional

Off course, when you claim to be a facilitator.guru, the issue of “who are you to call yourself guru” emerges. This morning we had an Online IAF-AGM (Annual General Assembly) 2016 on the professional development of facilitators. Here are some of my remarks. 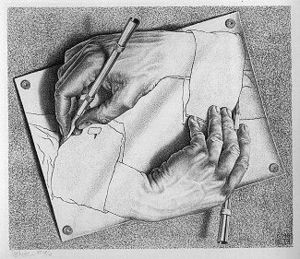 One of the issues that comes up again and again in facilitation is: “should I become (or remain) a (IAF Intl Assoc of Fac) Certified Professional Facilitator or not?“. I’ve been having this conversation from the very first meeting with IAF-facilitators in 1996. Over time, I initiated the Dutch version of the CPF-event, the first not-English event. So I’m not against certificates for facilitators and at the same I’m know they will never solve the issue of what it means to be a (process / group) facilitator.

certificates are handy
On the one hand, when you’re working successfully as a facilitator, you don’t need a certificate. Your success certifies you. It would be nice, to have some acknowledgement, so we invent customer reviews, badges and – in the end – certificates. Certificates create certainty, proof of ability, practice and practice what you preach; in the first place for you as a certified facilitator. You’ve passed the test!

And then again: “who are they/we to justify their/our professionalism?”. It also triggers an avalanche of new “certificates”, as clearly one cannot suffice. Not only by IAF, but also by other groups and associations. We’ll need a certificate to hand out certificates. And after sometime, when you have to pay, you start to wonder: “why should I pay to remain what I’m already doing and loving to do?”. Gradually, you start to de-test (pun intended). The certificate takes precedence. The method has become a means.

You may have noticed the picture of the two drawing hands by Esscher. The thing is, both are true and mutually exclusive. This smells like paradox. We recognize the tensions of belonging to a group or not. The famous “Groucho Marx-paradox”:

It is aptly phrased by Woody Allen in the movie Annie Hall: The… the other important joke, for me, is one that’s usually attributed to Groucho Marx; but, I think it appears originally in Freud’s “Wit and Its Relation to the Unconscious,” and it goes like this – I’m paraphrasing – um, “I would never want to belong to any club that would have someone like me for a member.”. He refers to woman, but I think we can apply it to professional facilitators too.

Love to be an amateur
I love what I do, as a facilitator. That’s why we use “amateur”, from “amare“, to love. In fact, I love it so much, I resist being a “professional”. It is not a profession, it is a calling, I’m used to say. Are you a professional or not? Yes! Can we both be an amateur and a professional? Lets dive into the paradox of identity.

Smith and Berg wrote (p 59): “We tend to view “this is me” in clear affirmative terms. We view the negation “that is not me” as being “other”.”

This “other” is being projected on our environment and treated as “them”. But now things become fuzzy and conflictual: do I have to overcome “them” to become “me”? How can I join “them” without loosing “me”? Or, should they join me? This paradox has become a conflict. This is the conflict we sense between “Certified” and “Uncertified”. One cannot be certified without people being Not Certified – you don’t need a certificate to be not-certified. And then there seems to be tension between “certified” and denying “Not-uncertified”. Within one minute we have created an either/or situation, right/wrong, professional/amateur. Unwillingly, we have created a self-referential system with an inner contradiction. Interestingly, dealing with this system is at the very heart of facilitative leadership. The very foundation of our work rests on self-reference.

There appears to be a ghost in the mirror
The tension emerges from the perceived opposites of “me” and “not other”. In order to know “me”, I had to split off “part of me”, the parts I do not like to see, things I need or want to hide. These parts are placed on the background, in the shadow or better, “complex”. From tension between “me” and “not-me” emerges consciousness; this is the source of being conscious. We project our selves unto “environment” and “other”. It is, as I’m looking in a mirror and do not recognize what I’m seeing: a mirror image of me. Also, the other person is doing the same thing to me. And then, when I see “other” I don’t recognize “me”. I’m not that “other”, I want to be “me”. In this recursion, resides an infinite regress. Like two mirrors, opposing each other, mirrors that are reflecting also the parts you want or need to hide … Vertigo by paradox.

Everything but that …
What we need to learn, is to accept or take back our own projections. Seeing “you as me”. This awakens your complex, the parts of “you” you’ve disowned. You’re seeing “your worst enemy”: it is you (or me, if you like). Your own projections are part of “their” and “there” (!).

Here I have to mention, that this might ne the reason why we have to love our enemies like ourselves. They represent us, they, in a strangely looped way, “are us”. They not like us – we not like them -, because we not like our (selves) and they not like them (selves). When we’re incapable of loving our enemies, we’re unable to re-own, or re-accept (or realize) our splitted-off parts, we cannot become whole again. At the same time, it feels like loosing. Sometimes, you have to let go to win. 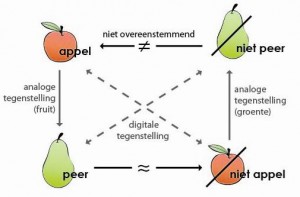 This is no Apple no Pear.
In this picture, taken from our book “Faciliteren als Tweede Beroep” (“Facilitation as a second profession“) I wrote: “pear” differs from “apple” (analogue (more /less) difference). This implies that “pear” is “not apple”, digital (yes/no) opposite of “apple”. Then off course, “not apple” differs from “not pear”, the digital opposite of “pear”. If “this implies that “pear” is “not apple””, it should imply that “not pear” is “apple”” (you can quote me on that). Off course it is, but many “not pear” is not “apple”, for instance cauliflower. We can “solve” this paradox, by saying that apple and pear are fruit (and not vegetable). This is called “different logical types”. In the making of this paradox, no apples or pears were used.

Group as mirror
As I’ve been telling for years: groups work like a laughing mirror. Others enlarge your “bad” parts, what we don’t like about your self and “they” minimizes your “good” parts, as this is in their favor. This is simply a result of the complex the group represents. The number of relationship with a group grows very rapidly. With 3 persons, you’ve got to manage 3 relationships (with both singles and with the pair). With a fourth participant, you’ve got three with one, two pairs and one with the three, so 6. A fifth person will add one relationship with you, four pairs, three threesomes and one with the other four. It grows with n!, 1*2*3*4*…. *n . So the power of a group is overwhelming. There is more of them, then there is of you. And it brings out the “rejected” parts.

You may now start recognizing any certification process. The assessors will stress you “poor” parts and you’ll highlight your “rich” parts, both moving into the conflict-zone. It triggers a cover-up (I’m hiding what i think is “bad” and they trying to expose this) and the cover-up of the cover-up (off course, we’re all professionals and in the same league. If you don’t expose us, we won’t expose you).

Moving on a Möbius band
Smith and Berg also notice, that we have moved from “knowing“, which requires differences and contradictions, to “feeling“”, where we suffer or feel happy because of the differences. Being a professional facilitator is of a different logical type as loving being a professional facilitator. And not only are these not opposites, we also can move from one position to another without crossing a border.

We long for one-ness, to be whole. The place where we want to feel one, is the most difficult one: within a group that represents all our differences. How to be belong together, without being one. (It’s called EU, by the way which fractally mirrors the UK, and vice versa. Interestingly, this is also the movement of coming together and breaking up, but that’s a different story).

Now, in “normal” professions (like accountancy, consultancy, project management, training, …) this is not a big deal. In facilitation it is, as it is the core or heart of facilitation itself. Every individual wants to be an individual a part of a group, and a-part. We – as professionals facilitators – are apart and a part. We have to be “independent” and “dependent” at the same time. We have to be trusted and able to give negative feed back (= distrusted), voicing what is not being heard. You can become you, only through addressing these issues yourself. You have to love your own enemies. We work with both feelings and thoughts, with the concrete facts and abstract ideas (fiction).

Love the pro’s
This is immergence, immerge yourself in this situation and become aware of the opposites, the dualities, which are needed to become one (again). As facilitator I dive into the group, the situation, addressing what we fear most: being exposed as “other”. I go towards what the fear or anxiety, explore the tensions and facilitate, or liberate, the movement of “others” in “self”. In the end, our own projections are blocking us. They need or want to be “realized” (I’ll come back to this key word later). Perhaps there is the biggest issue: we tend to create a “stand off”, where we should create motion. Off course, this requires courage. Courage to become engaged, to become desperate, loose and succeed. This is, I suppose, a true reason to become a CPF. Not because of the certificate, but to prove you love to show you don’t need it.

Self-affirmation (Smith and Berg, p 148) turns out to be an act of participation in the universal and, as such, is an affirmation of the divine through the human.

*) I must say, I do like the process of certification by IAF, because it is not a paper exercise, answering questions and getting 8 out of 10 right. It consists of an actual 30 minute session with a group, showing that you’re capable of doing what you’ve been telling. Then you get feed back and can improve. The re-certification is not of my taste, as it is being done on paper only.