EU and the paradox of Engaging 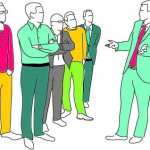 Paul Nunesdea asked in a Linked-in group of facilitators: Do you believe European Union can ever be able to work together as a Team? What would be the opportunities for group facilitators? He added a youtube movie:

Yes and no. I agree with you, that teamwork and cooperation is of the essence of both human happiness and sustainable growth. However, the issue in the European Community is NOT about team work, but about dividing the benefits of cooperative team work. This is a classical problem, a combination of Tragedies of the Commons and Fixes that Backfire. What we see working here, are the paradoxes of Engaging: “disclosure”, “trust”, “intimacy” and “regression”.

We’re divided by borders, boundaries. This tends to focus our attention on co-operating (engaging) inside a country to “become better than the others”. In doing so, we exploit our natural resources, which are distributed in a UNDESERVED, UNFAIR way. There are external determining forces for the wealth of a country: its location (“location, location, location”), the proximity of one another and its energy (power) supply . Countries with cheap energy supplies have a big benefit. These resources, by the way, are literally disclosed through mining, drilling, etc.. Trust and intimacy benefit from proximity and easy access to roads and waterways; distances create less engagements. When people have to live in close proximity, they tend to communicate better, trust each other more and co-operate. (Of course, living close together has its drawbacks too, so as soon as we’ve reached a certain level of wealth, we tend to “move out”).

These undeserved advantage, are presented as (well) deserved, fair or “natural” (as in “natural resources” :-)) . So there is no need to share them with other, less lucky nations. Also, messages like, “it not luck”, “this is fair” and “not cooperation but competition made us rich” have to be reinforced. Small initial differences are thus enlarged.

As a by-product, we’re creating scarcities between countries, which then are attributed to the inadequacies to the “poor” country. These are being seen as “regressed”, less advanced. As these are clearly inadequate to compete with us. Would they have succeeded, however, we would have been poorer. Which, most often, we were in the past. The process is self-sealing, as the more powerful countries have more power to resist redistribution of their wealth. This is often done in a regressed, almost childish way. And the poorer countries are being perceived as “jealous”, “childish” or “lazy”.

All these processes lead to differences in perception, associated with the paradox of Engaging. So a movie like this, tries to influence perceptions. But perceptions result from the underlying processes and not the other way around.

I found it interesting, that the movie only implicitly hints at the sources of the problem, and even reverses it: unfair distribution of burdens to labor and jobs. It is, as if the truth cannot be told: differences in wealth should be redistributed. Off course, the better way would be, that EU taxes the profits of companies which either evade taxations – more power – or do not invest their earnings back into the economy (but give it to banks and share holders, who have funded them). The EU should not try to increase investment through lessening the burdens. Only the companies will profit from this, as the movie clearly states. These funds should be reinvested in the EUROPEAN economy through better social security and reducing personal debts. It is a well known fact – dating back to Keynes – that is not risk which determines economic behavior, but (perceived) insecurity.

Jan Lelie works as a facilitator in The Netherlands and Europe. He is a father of two - now grown up - children. He is a Certfied Professional Facilitator and has degrees in Business Administration and Physics. He is developing a legend of meaning.
View all posts by Jan Lelie →
This entry was posted in Engaging, Toeval and tagged Engaging, EU, team work. Bookmark the permalink.