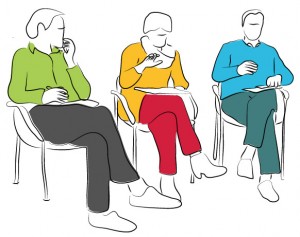 Global4cast.org is one of the most interesting I’m following. I think it is connected with Antifragility by Nassim Taleb and Homo Deus by Harari. One of its latest post https://global4cast.org/2017/07/11/to-survive-we-must-be-all-inclusive/. I’ve added these comments.

All laws of physics emerge from a paradoxical pair (like + and -, up – down, …). The tension between the alternatives is being released through motion, which can be used to do “work”. Conservation of energy – First Law – means also conservation of paradox. Like energy, paradoxes are converted into each other. The “lowest” type is heath, which is motion, action, the processes of conversing.

Between groups there are three inter-group paradoxes (Smith and Berg – Paradoxes of Group Life):
paradox of scarcity / abundance – which makes us create boundaries (which leads to the “problem” of migration),
paradox of engagement / disengagement (which leads to ingroup / outgroup and for instance the Brexit (“you can check out, but never leave”) and the
paradox of power / powerlessness (which leads to the problems of followers / leadership).
These paradox are in a dynamical equilibrium, creating a chaordic system.

The second law of thermodynamics creates “disorder”, entropy, or better use the verb “entropy creating“. The paradox here is, that an orderly system can produce more disorder then a disorderly system. So “free energy” will use itself to create order, which will be released later in heat, motion. Dissipation orders itself. If is “as if” the universe waits to collapse, because it “knows” that it can collapse with an even bigger bang.

The trick here is to establish a self-organizing, auto-catalyzing, self-referring system, aka “life“, with metastable states, to move away from equilibrium (and death, speaking of paradoxes). Any system needs “free energy” to jump to a more organized state. Once it has done tat, it can propagate itself. This is being called “punctured equilibrium”.

The third law is the law of least action. Every process produces the least amount of action or work. In order to do a lot of work, one needs a lot of “free” energy. Off course, nothing in life is “free”, so the equivalence here is, that we “pay” through disruptions, suffering, devastation. At least, until now, in the classical way, using unintentional evolution.

I suppose the next step is to get into intentional evolution. I think we need to use the paradoxes of power here: the interesting thing is, that power is connected with the use of energy. Power needs connections, a network, a grid. (I do think that the current “energy transition” is also part of the solution / problem). Also, a network structures, guides. We’re now witnessing the auto-organizing process of the internet. The way this work, is that first power is being concentrated, “attracted” – for instance in Google, Amazon, … much like the current great powers. This type of situation is fragile, very fragile, hyper critical and will be released into a new way of organizing. I suspect that we’ll create a network of distributed, local power. This type of organizing processes will use facilitative leadership.

It took a while to find it, but the article The evolution of cooperative organisation gives an interesting option: a new type of management. Stewart – interesting name – explains how RNA/DNA offers a digital type of “managing” the analogue type of evolution of metabolizing molecules. In way, they co-evolve. The basic problem with our current type of management, is that managers benefit more from coordinating cooperation than the participants in the organization. They’re having the power, but they do not use it to also share the benefits of cooperation. This is because the myth of “the invisible hand”. There is no “invisible hand” (or an all-seeing eye-in-the-sky). The other myth, the communist tale, doesn’t work either, because also here, it propagates a “winner takes all”. Taleb discusses this point from another perspective: managers don’t carry the risks of failure anymore (but say they do). 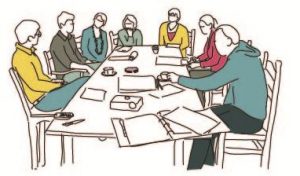 So, we’re at the edge of a systemic transformation, the development of a new type of leadership, which I call facilitative leadership. These leaders don’t get big benefits from managing or coordinating an organization. Because the don’t lead the organization in the traditional way. We lead the organizations through leading conversations, having dialogues. They do not command and control, but listen to the participants and check their assumptions. They guide the conversations into effective and efficient actions. And not only do they guide the conversation, they also manage the distribution of wealth through conversations. These leaders use the power of expressing by creating new myths. We’re seeing the emergence of this type of leadership in Agile, Deep Democracy, Dialogue, Intuitive Intelligence, Sociocracy, Systemic Work, … And what we’ll have to endure is the death struggle of the old system.