Last Friday, at a meeting of facilitators called Facilitator INNovation, I introduced a new approach I’m developing for – amongst others – an intake. The approach is based on using LEGO(tm) figures in a constellation, arrangement or system, mixing it with the games or plays of change.

Systemic work
In systemic work, we usually represent a given situation by human beings who “represent” elements of the situation. These representations, take in positions relative (!) to each other. In working with the tensions between the elements and their positions, usually there emerge some possible “outcomes”, which can be explored. A solution is being offered through the system, without an explicit analysis of the situation and without trying to understand (in my opinion, “control”) the given situation. The approach is holistic, mindful, non-dual and based on working within the unknown. Solutions present themselves spontaneously, often more as an insight, a “knowing” or acceptance of “what is”, rather than a concrete action. But often it highly creative solution present themselves.

In family therapy, these are most often family members, represented by “strangers” or “others”, not family members. In organizational settings, we usually represent functions (as opposed to people) and other elements. For instance, a report, a budget, or any other relevant elements. Furthermore, most of the time, we have involved participants, who may be invited to take a stance, take up a position for an element. In complex situations, where a lot of (emotional) resistance is involved, I more than once noticed that participants have difficulties in expressing the position of an element. The emotional or systemic pressure becomes too much too bare. Mind you, this is a subconscious process, and easily denied. It is also not something to be discussed in groups. And, as with an intake, sometimes, we do not have participants present. In these cases, we can use objects, articles or even cards with words. While working with these issue, the thought occurred, that we could use small LEGO figurines, as elements in a constellation.

Using LEGO figures
The use of dolls of figures is not uncommon in situations, requiring mixed emotions, complex causes, and therapy. Even in e-mail, sms and Twitter we regularly use figures to convey emotions: :-(, :-|, 😉 etc. Our ability to project our feelings into them makes them more accessible to us and others. We can safely split off our emotion, thought or intuition, project them into the puppet, (re)search for alternatives and solutions and re-own them. Projection in communication precedes use of words, as every baby knows.

Intake of a meeting
In this experiment, I asked facilitators to represent a situation of an intake for a group meeting. One facilitator brought a case and played the client. Another acted as facilitator in the in-take. I stipulated that a client usually already has an idea of a solution and an appropriate meeting. Also, the client usually feels insecure, is unalble to tell what really is playing and doesn’t want to loose face. 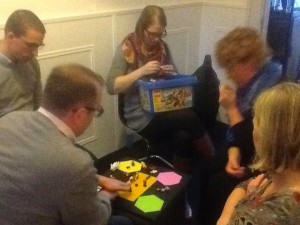