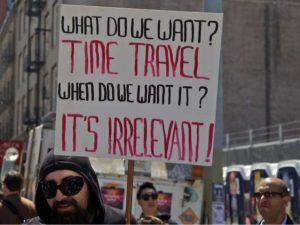 The Law of the Requisite Variety, Ashby’s Law, “Variety begets variety“, governs us all. This law also enforces itself. She self-refers. Complexity, diversity, variety, differences can not be reduced. Reducing means terminating, getting rid of, killing a part of the system, or sub-system. And the other way around: system (I’m referring to any universal system) maintains diversity through getting rid of any subsystems that do not get Ashby’s Law – if you see what I mean, ambiguity intentional. And, as the picture suggests, she does so in her own time. No hurries. For more varieties of the law: visit Ashby’s law in the first hour of your day.

Trying to create a “safe” system by reducing complexity, creates something that seems, feels, looks robust. And this will also become fragile and prone to (incidental) major disruptions. Not understanding Ashby’s law shows itself in what we commonly call crisis, accidents, (traffic) jams, “disaster” (funny, the word comes from “ill starred”). In this way, system corrects her parts. In doing so, she (I like to refer to her as female, a goddess of creation and destruction) creates a lot of what we call destruction, chaos, disorder. (As I like my jams, I skipped jams). You can get a taste of destruction after a hurricane. And you can also see her work in the more disastrous things like wars. Trying to reduce complexity – for whatever reason – will lead to more and bigger conflicts, wars, destruction and disasters. Your reasons, like safety, freedom, independence, security, sound sound. But we cannot reason with this law, we’ll always loose. Look at our concrete situations, they’re all chaotic.

At the IAF-EMENA conference in Paris, last weekend – thank you guys – on “The power of Facilitation”, I suddenly realized, that converging after a diverging phase in meetings reduces complexity. In my workshop I asked participants “Where are you now?”. Then I asked them to find a position that represented their answer. Great fun. Sharing divergent opinions, points of view, meanings, works well. We’ve created common understanding. At the same time, we’re all at different positions, different corners. We more or less agree with the people near us, and we can see the standpoints of others. I left it at that in my workshop at the conference. For me, it is enough to realize our differences.

Later, I was told, I should have done a “converging phase”. It is stated in all the text books on decision making. Divergent, creative thinking first, then an intermediate zone and then clustering, voting and getting to one “point”. People who resist, don’t understand the importance of unity and should be “convinced”. Or else … . A group should have unity, vision, a common goal a “point on the horizon”, before we engage change, strategy or action.

Off course, you now realize, that this reduces complexity. This makes your group more vulnerable to incidental “disasters”. The bigger the unitary system, the more we try too reduce complexity, the “bigger” a system will become, the more fragile – fragility is not being small -, and the bigger a disaster. When there is no back-up, you’ll have a problem, when the system fails. With a back-up, the failure will be even bigger. Been to an airport lately? Queuing at the safety check compensates for the lack of variety caused by the trying to be safe. (Or deny flight for people from certain countries. Look what a chaos that created!). A Pyrrus Victory in the make, success in reducing complexity is the first step on the road to disaster.

When you apply these notions on current critical situations, you can perceive how not understanding Ashby’s law causes our disasters. For instance, take a random decision (pun intended) like Brexit. One way or another, it will be a disaster, everybody agrees. It will be a disaster for the EU – are hoping many people, both in and outside EU – and for England – other people’s expectations – for Scotland, Wales and Ireland – they fear with big anxiety. It will be a triumph for the Law, because the Law of the Requisite Variety requires variety. (And some lucky speculators will benefit, off course.) Unity – in a European Union – and also in a United Kingdom, a United States, a Soviet Union or in Verenigde Nederlanden – brings “safety”, at a price: a collapse of a system, that was intended to prevent that from happening.

Now, I’m not saying that an EU causes a Brexit*) (and the other way around). I’m meaning that it is inevitable. Nor am I suggesting that a Brexit is right or left or wrong and right. It is not caused by politicians, they’re just murderers becoming victims – to stretch the metaphor. It is not caused by “the people”, they’re just victims becoming murderers (murder by vote). It is neither caused, nor effected, I might add, by economists, scientists, lawyers or bankers, nor through capitalism, socialism of liberalism. They just advocate and try to shift the blame on either the people or the politicians. Depending on their point of view. Brexit results from ignoring a law as important as the Law of Gravity. Everything that goes up, must come down (Law of Gravity). Everything you unite, will fall apart (Law of requisite Variety). Look at the facts: every unity results from diverging parties and all diverging parts come from unities. Human beings only cause “independence wars”, they never start “independence peaces”.

We treat Ashby’s law like we used to do with the Law of Gravity: something that is heavier falls faster then something light. This is proven by letting a feather and a rock all to the floor. Simon Stevin – yes, he, not Galileo – showed it at the leaning tower of Delft: a wooden and a stone stone hit the ground at the same time (and the same speed). Current understanding of the Law of Requisite Variety, makes us work against it. We assume there is a difference between cause and effect and that this difference causes our problems. Get rid of the causes, and we will have no effects. If you throw something high enough, it will not fall down (OK, here my metaphor breaks down). We think that complementary differences are opposites. For instance, the shores of a river belong together – complementary – and both are called “the opposite” shore. This makes perfectly sense, when you want to build a bridge. It becomes insane, when you want to unite the two sides. You’ll start a war with “the opposition” and the bridge will be burnt down.

In my Paris (Tokio, Seoul) workshop, I showed how our current paradigm on communication, works well within a limited set of situations. In small groups, we complement each other. We can share, communicate and work together. This has a limit, the number of relationships, of about 200. Inventing tools made human beings “see” metaphor. A tool requires one to see another use of a stone or a stick. With toolmaking, we create diversity. And it prompted another invention: language. With language, human beings can tell each other how to make tools, language instructs, coordinates actions and behavior. It creates a sense of unity. With language, we can lead larger groups. Language can unite (and divide- that’s why it changes so fast. Language speeds up diversity creation). With some great (I typed the word “creat”) other inventions, like religions, science, writing, printing – read for instance Harari’s “Homo Sapiens”, we were able to ignored the Law. But not any longer.

conduit metaphor – a dominant class of figurative expressions used when discussing communication itself (metalanguage). It operates whenever people speak or write as if they “insert” their mental contents (feelings, meanings, thoughts, concepts, etc.) into “containers” (words, phrases, sentences, etc.) whose contents are then “extracted” by listeners and readers. Thus, language is viewed as a “conduit” conveying mental content between people.

We currently tend to use the “conduit metaphor” in our language. Our current languages – or, to be precise, the grammars of our current languages, – have been used to reduce complexity. This is an easy way to use language-as-a-tool. Like driving a car, without understanding how the car works. This works for driving cars, but not when you’re driven by language. Driving a car will get you in a traffic jam – because you do not know how the system works. Using language without understanding how language works, will get you in to DEEP TROUBLE. When it breaks down, you cannot fix it. We have been trained to think that meaning is in the message, that these words convey meaning, that you only have to listen to what I say, in order to understand. That there is a point in this sentence. There is no point, the point is in you.

The Law of Requisite Variety asks, orders, requires us to understand each other better. She offers us one thing: things are as they are. Both good or bad, and good and bad, or neither. She does what she does. She cannot care, people care. Our ethical assignment is to create choice, variety and diversity in stead of reducing it. To pose questions, to prefer questions, to remain or to live with our questions. The answers will come, in due time. You are free not to listen to the Law. She doesn’t mind, doesn’t care and will come back to you.

And how to “solve” our global problems? I’ll be back.

*) and you can put any human conflict here Crimean, Middle-East, Korean, Venezuela but also the fire arms debate, financial crisis, the so called “rise of populism”, global warming, … The details differ, the structure is the same.