The driving force behind systemic change 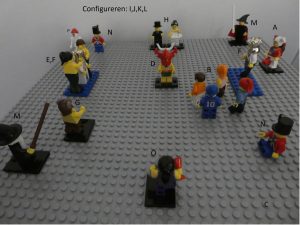 The quest for autonomy. The world seems to be in transition: war in the Middle-East, terrorism, Brexit and independence of Catalonia, North-Korea, unrest in Africa leading to mass migration, the down fall of Venezuela, Brazil, the financial crisis, climate change, … . Let’s take Brexit in the EU – any situation will do – it came as a surprise, because it was not predicted. Crimean liberation or occupation – depending on your point of view – was a surprise. The same is true for “Trumpism” in the VS. Or the refugee situation or … . Behind this, is only one driving force. Even the recent shooting in Las Vegas, I’m sorry to say, is an expression of this force (gun “control” and the individual safety). It is the driving force behind evolution and systemic change, it is the Law of the Requisite Variety, Ashby’s Law.

“Variety begets variety“. that’s it. That’s the law. OK, most people formulate it like “variety absorbs variety”, or “variety destroys variety”. Or “a regulator requires at least as much variety as the system possesses”. Or: “The vocabulary of responses a system must have, or must develop, to meet the variety of phenomena it encounters in dealing with the environment. An insufficient variety limits the system’s ability to respond effectively to conditions in the environment that could destroy it.” These are just variations, if you see what I mean. The law is not the formulation of the law. Like the Law of Gravity, the apple will fall, regardless of our definition. And, like all real, natural laws, it doesn’t need law enforcement. It enforces itself. She is autonomous.

Ashby’s law also means “chaos out of chaos“. Chaos doesn’t mean “disorder”, it means “unpredictable”. Human beings like to have predictability, as we hate uncertainty, doubt, insecurity. We crave for safety. So we try to order things, measure and classify, imposing human laws or “order”. Order and control. Trying to control, maintain equilibrium. Our laws have to be enforced. Because, because, because – the wonderful things Ashby’s does. I mean, the Law of the Requisite Variety doesn’t care about our human needs. She rules, getting her ways, chaos.

The paradox – and this is how this law operates – being, that an orderly system can produce more variety than a unordered system. That’s why we let Ashby’s law work for us, why we can see “order out of chaos”, the 2nd law of Thermodynamics. That’s why the British defined the law as “always increases entropy or disorder”. Dieu et mon droit. We impose control, order. The law doesn’t follow our definition, it follows its own rule. And while our “order” means “control”, “Ashby”‘s order means chaos. Everything evolves from chaos, everything is and always will be chaotic. Or rather, beyond OUR control.

Our addiction to safety, order, suits Asby’s Law very well. Political systems get more and more complicated, laws and bylaws in the judicial system have become so intricate, even lawyers get lost. Financial systems are going to implement Basel 4 Standards, to mitigate against crisis. The system itself is still in crisis. UN, EU, but also China, Russia, Indonesia, Mexico and Brasil are getting more and more out of control. It doesn’t matter if you’re living in a democracy, an autocracy, oligarchy, theocracy, aristocracy whether it a union, republic of monarchy. Things are becoming more and more regulated AND unpredictable. Higher dykes mean bigger deluges, the Dutch way to cope.

Big systems. Not only is Physics becoming less and less simple (and more expensive), so is for instance care and medicine. The problem is not, that the cost of care is beyond control. “Care” behaves unpredictable, like about every medicine. There is no ultimate cure for illness, and certainly not for death. Death is not a curable disease, it is an expression of Ashby’s law.

On a small scale, the same is true. In The Netherlands, it is taking over 200 days to formulate a political agreement. I wonder, will it work? No. Why not? Politicians focus on “security”. The main result: chaos out of order (pun intended). The source: “the Law of the Requisite Variety”. And look at your local street. How many traffic signs? Why this “school zone” every where? How many traffic controllers do you need to change a bulb? I blame Ashby. Did the freedom of market forces increase or decrease the amount of paper work and bureaucracy for your water, gas or electricity bill? No. They just shifted it to you. The culprit: Ashby.

Thanks, but no thanks. We thank our life to this law. Because a living organism produces more chaos, then a dead stone. Life is erosion 2.0; humanity its greatest triumph. We don’t have to be grateful, for one thing, because the Law doesn’t care, one way or another. And, for another thing, because she also supported us in creating the mess we’re in. Isn’t she a bitch? I said, supported, because in essence, it is our own responsibility. Our endeavor to bypass the Law, to “feel safe”, created a system that is not robust but “fragile” and not “anti-fragile“. Safety is not in numbers, nor in laws. Control doesn’t prevent disaster, it just makes them bigger. Our desire for security, safety, freedom and autonomy (well, not freedom and autonomy as I know it) just feeds Ashby’s law.

What can you do? What ca we do? Nothing. Not for the Ashby’s. It is what it is. However, Ashby, remember that name, presented his law also in a different way:

There it is! That is the way to use it, to fix our “problem”. The capacity as a channel of communication, that’s our bottle neck. If you want – and you do, because you need security – to grow, to develop, to evolve: create bigger, better channels of communication. The solution is not in the dykes, they have become part of the problem, it is in the channel. Seek no liberation of fear in laws that control, they’re just suffocating freedom of expression. Do not wait for a leader to follow, but develop your ability go with the flow.

What do you mean by communicating? What is this thing called “communication”? Who is in charge of the channels? How to exploit this and cooperate with the Law? Which existential question do we have to address? How to deal with life and death, isolation and groups, freedom and dependency and this thing called “meaning”? What is Ashby’s Law trying to teach us? Stay tuned.