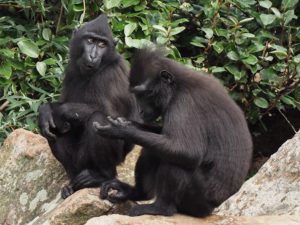 Is there a scientific explanation for the evolution from molecules to (wo)men? Yes there is, nature (or, “naturing nature”). The same processes that drives evolving: random behaviour, Brownian motion or ergodicity. Naturally, all processes consist of random behaviour.

(Even your thoughts are “random”. See? The problem of explaining evolution through theory, is that theory emerges from randomness – just mingle ideas into structures that “ makes sense” – , and therefore cannot incorporate randomness or paradox. In practice, there exist differences between theory and practices).

Everything behaves and in behaving exchanges what ever you like to call it. After some cycles of interacting, any set of exchanges will settle (pun intended) into a settlement. Rapid behaving things will set rapidly, creating slower behaving sets. These sets will set themselves too. Sets within sets of sets, a bit like a human in a family in a house in a town in a country.

Random processes cannot not self-organize. (Paul Watzlawick didn’t noticed this consequence of his first axiom, “All behaviour is communication”. ). Each and every process is self-organized, from the humble electron to the universe, from molecules and cells to human society. So nature (noun), by its own laws, natures (verb) nature. This way is the natural (and only) way.

(By the way, even languages organize themselves. That’s why we have to call these processes self-referent or – making (facere) itself again (re). Now figure our for yourself, why management or dictators try to control language)

Because of the Law of the Requisite variety (Ashby’s Law), a set or system will be as diverse as its environment. As self-organization organizes its environment to support it (co-)existence, an environment will become as complex as its constituting processes. It will seem to “try out” every option available, seemingly to invent itself. It stops, when all the options have run out.

If there is life, nature will find it

Off course, any set may “walk” down a dead-end. There might be an option which leads to higher of better or more complicated situation. The system cannot know this. But the universe, through space, can set up millions of conditions, blindly “trying out”, possibilities. Inevitably, if there is life, nature will find it. That’s why – I suppose – we’ve been lucky. We’re living the one chance in billions of worlds, in billions of years. On the other hand, if there is a chance of one in a billion, the chance is 1. Life will happen, given a chance.

If there is chance, however small, that (biological) life can emerge, she will (I’m assuming that she is a mother, the mother of invention).

The paradox being that life will appear to create the conditions for its own existence. How to explain? Only in a theory, which is founded on random behaviour. And here we have “science” again, which is based on the notion of “control”, like the cell nucleus or the management, that “takes control” after self-organization. In other words, theory has to give up the notion of control in order to explain evolving. (The same assumption underlies religion: “someone controls”).

Now, Bayesian statistics provides an explanation on the emergence of “ life”. The basic idea is, that any situation in a Markov chain of events can be fully described by its parents, spouses (or partners) and children. In other words: interacting between processes (parents), under the right conditions (partners) will produce consequences (children) and these fully determine each other. In fact, from the outside, you can see only the cover of the process, called the “Markov blanket”.

You have to understand statistic. For instance – your car can be parked in a street at several positions, depending on the conditions when you arrived. It might be in front of your house, near your house. Or, when the neighbors were having a party, around the corner. Your car is always in a position, but not always in front of your house. Off course, you’ve always got an explanation for where it is, but from the outside, it looks like a random walk.

This is why – as Maturana and Varela state -, an autopoietic process is operationally closed. And structurally coupled.

Science is no exception to this principle, so scientists create and maintain a “cover”, hiding the inner working of its elements. The cover is “jargon”, the language of science itself. Science uncovers (“how it works” ) at the expense of its language, covering “what works”. Feynman was very keen on this.

As science evolved from trying to control nature, it has adopted a “command-and-control language”. He – the scientist – is therefor unable to explain in its own theories, what nature is telling or showing us: evolving evolution.

If you need or want or must believe in a god or gods creating this universe, simply substitute “Natura Naturans” for this description, as Spinoza already pointed out.

Trust nature to organize itself. Observe, let it take its course and if you need to intervene: offer freedom of choice.